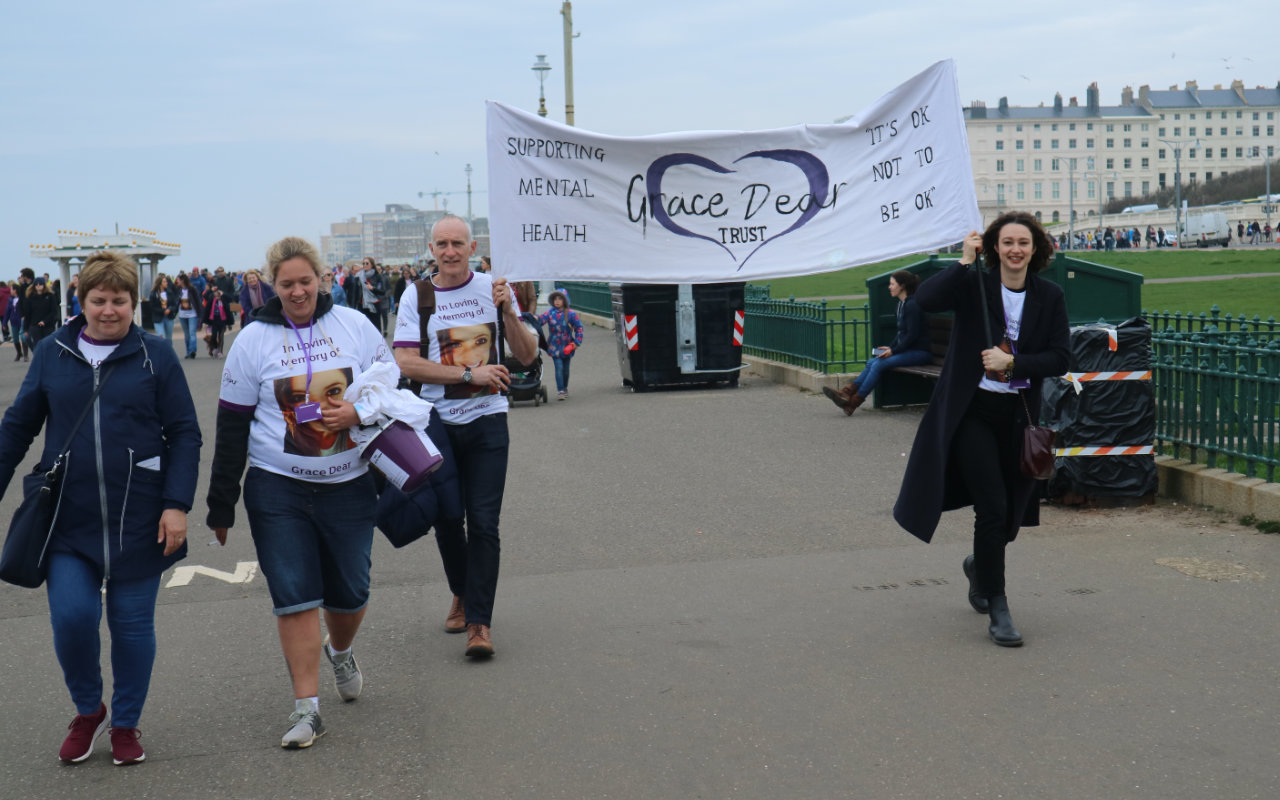 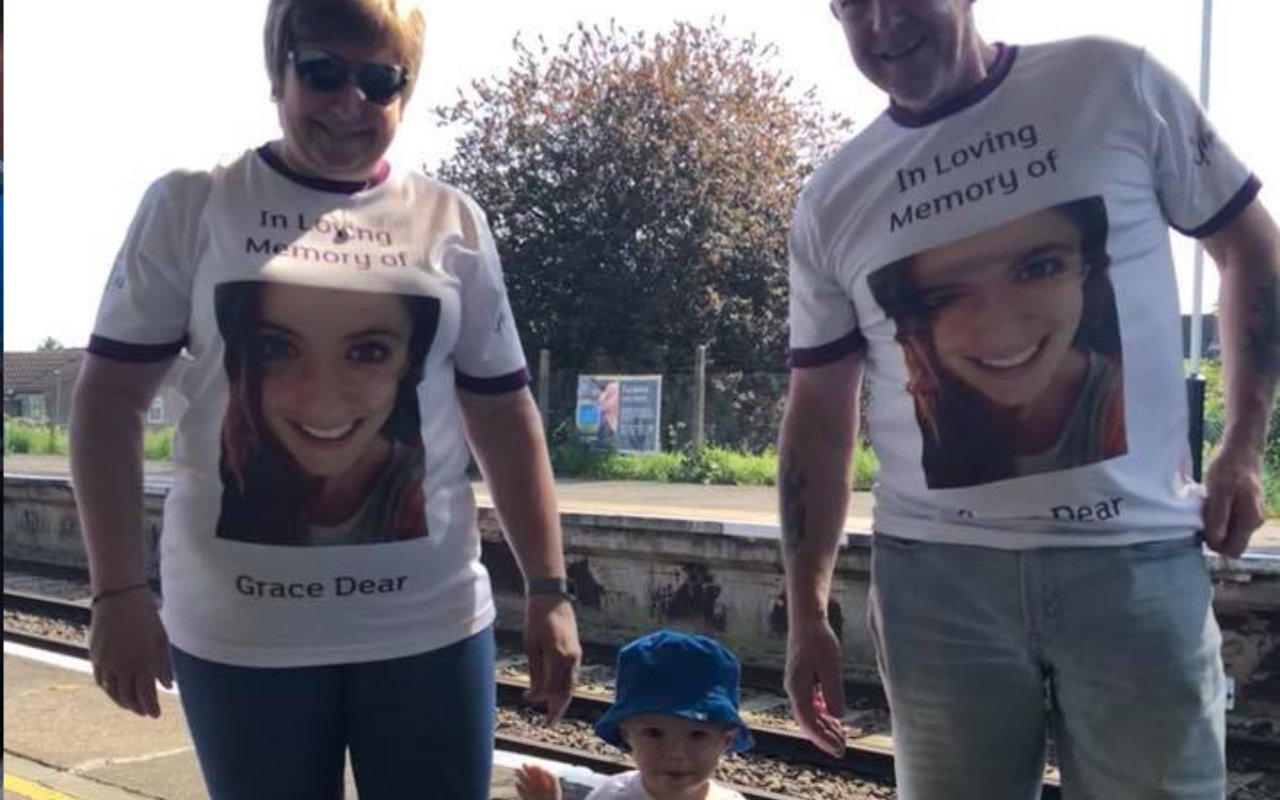 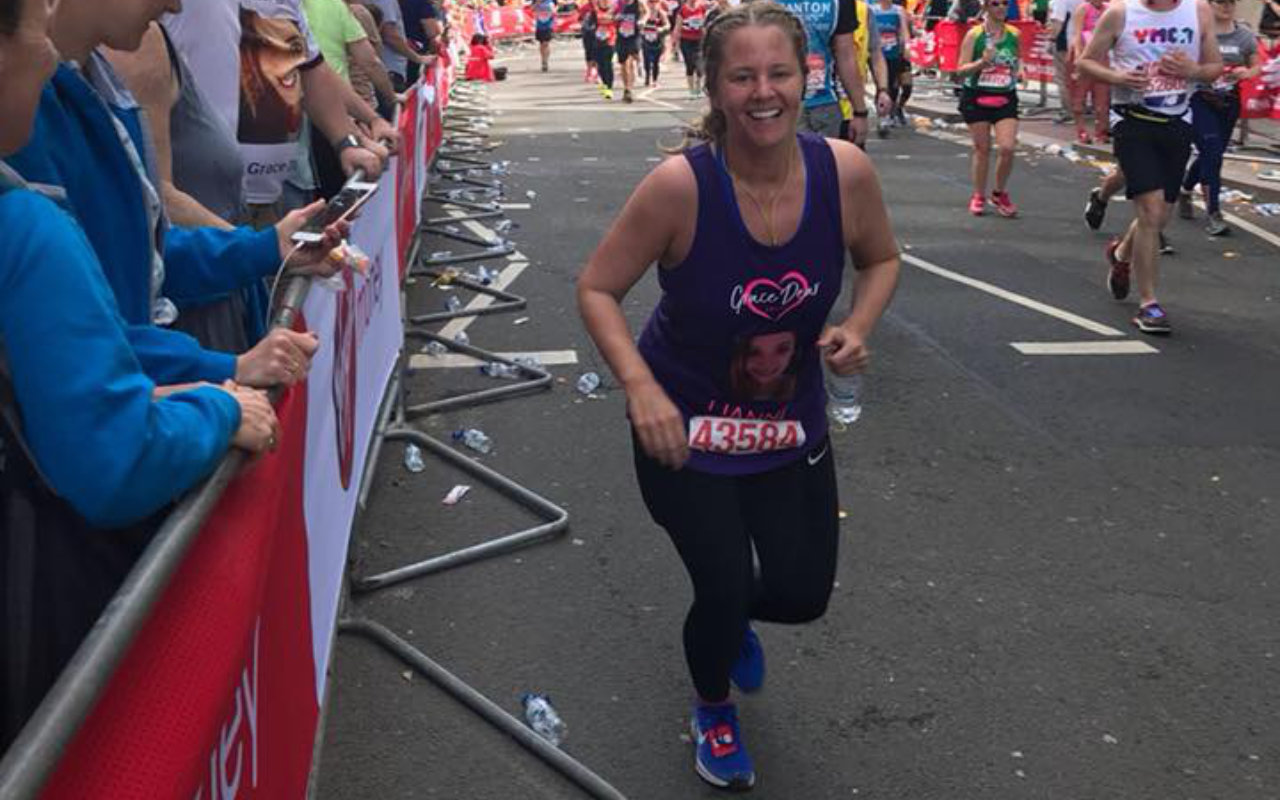 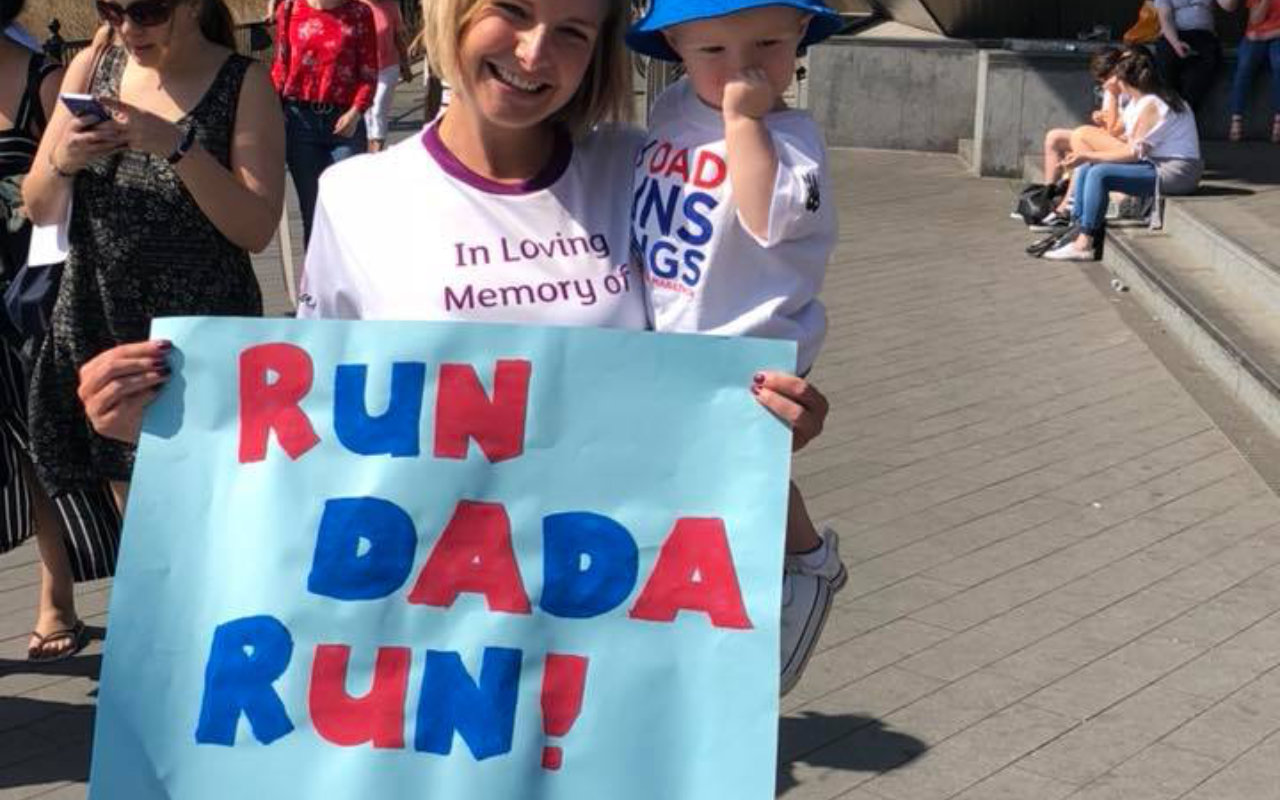 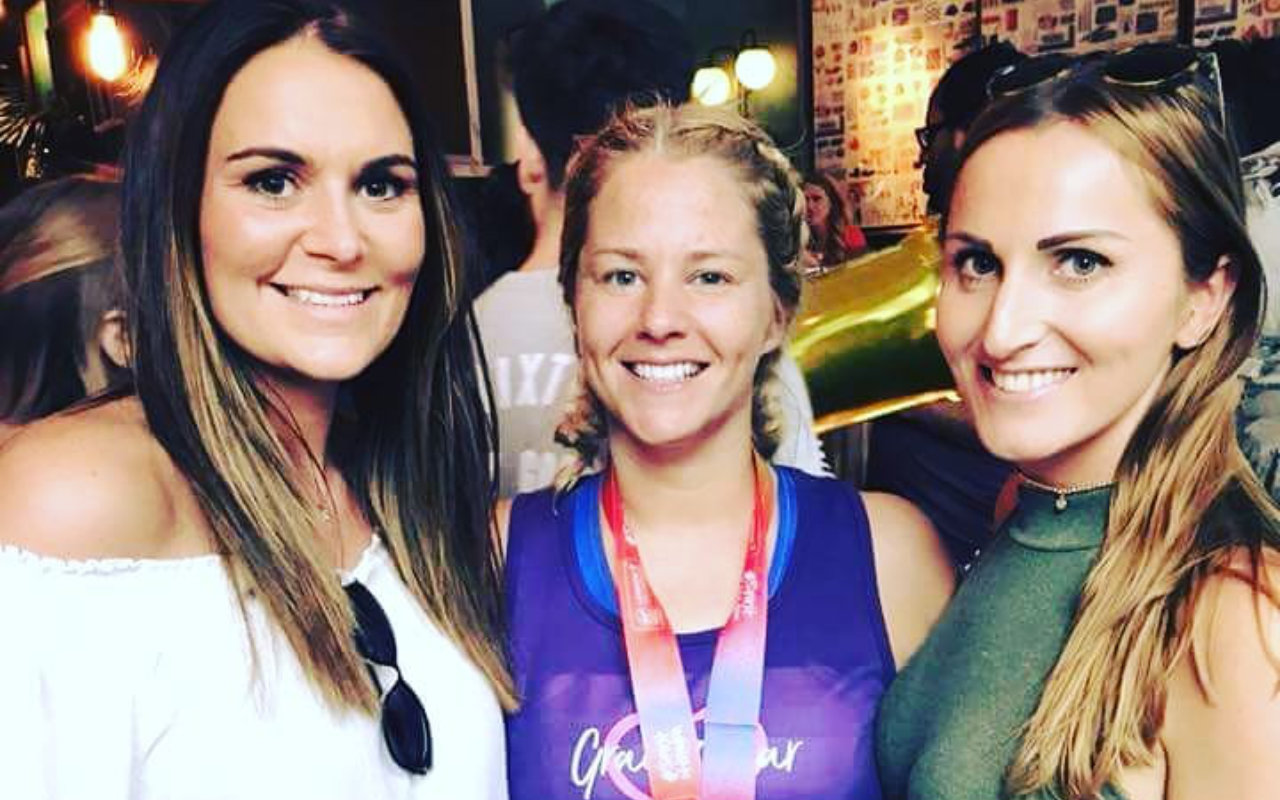 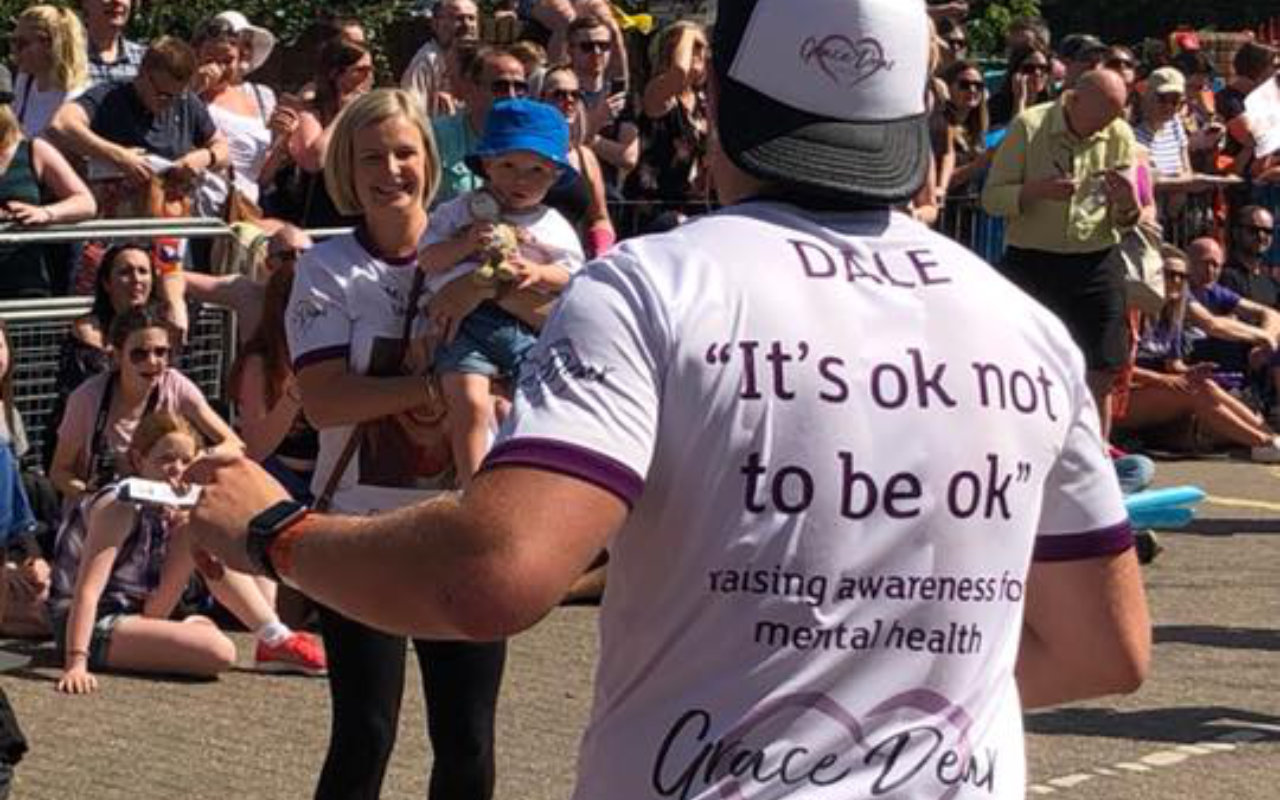 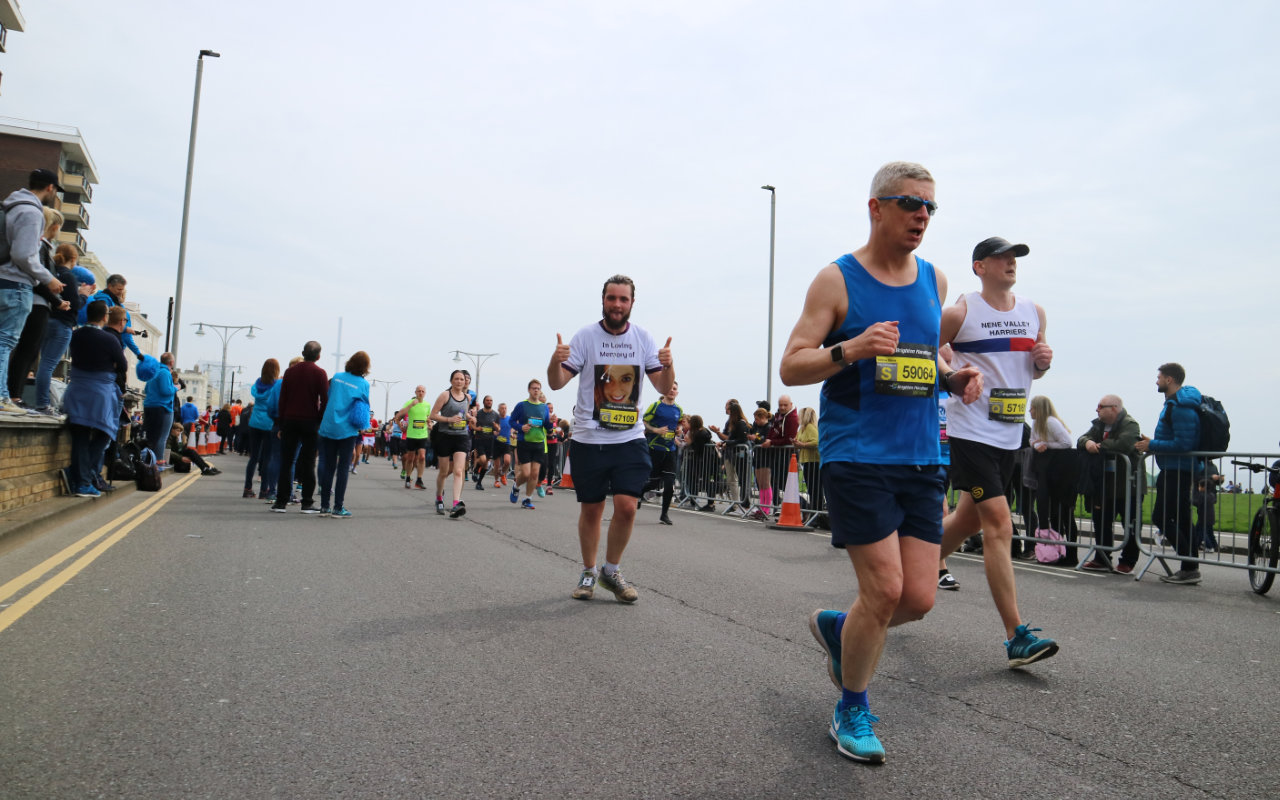 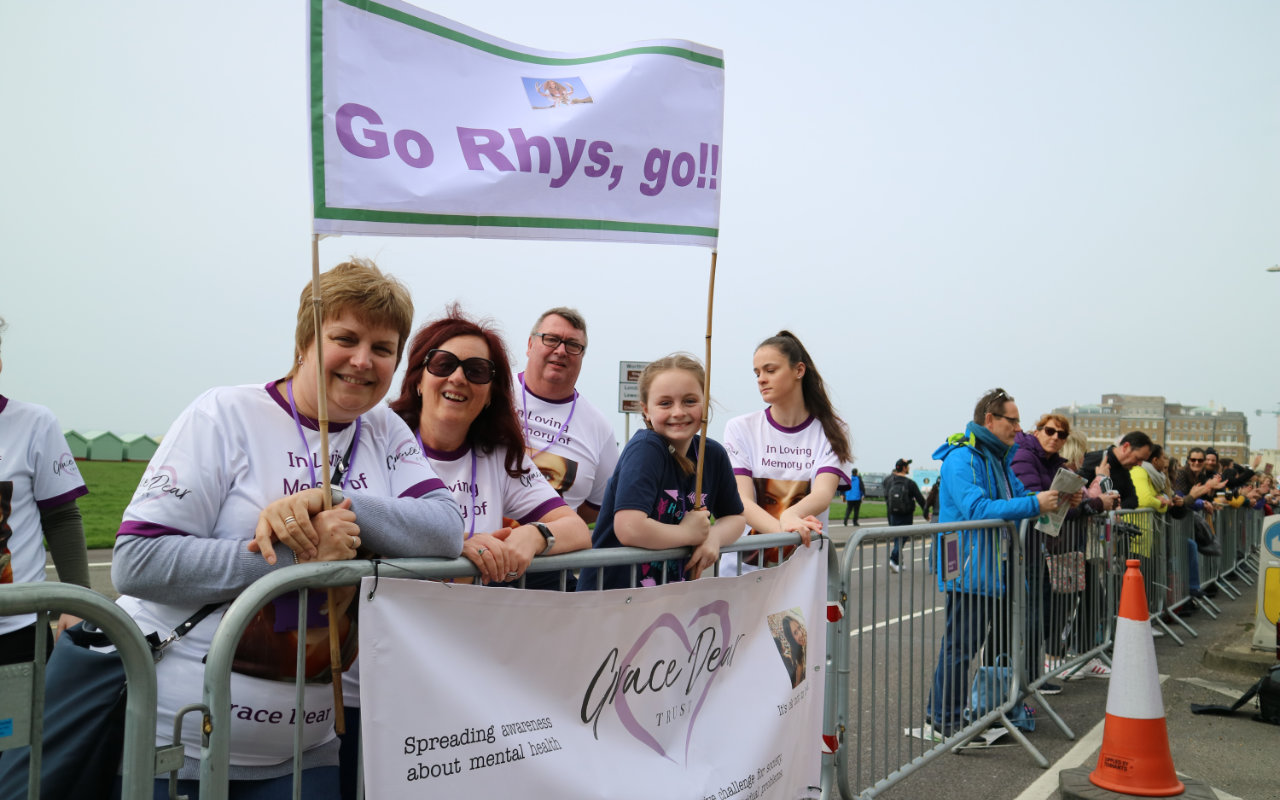 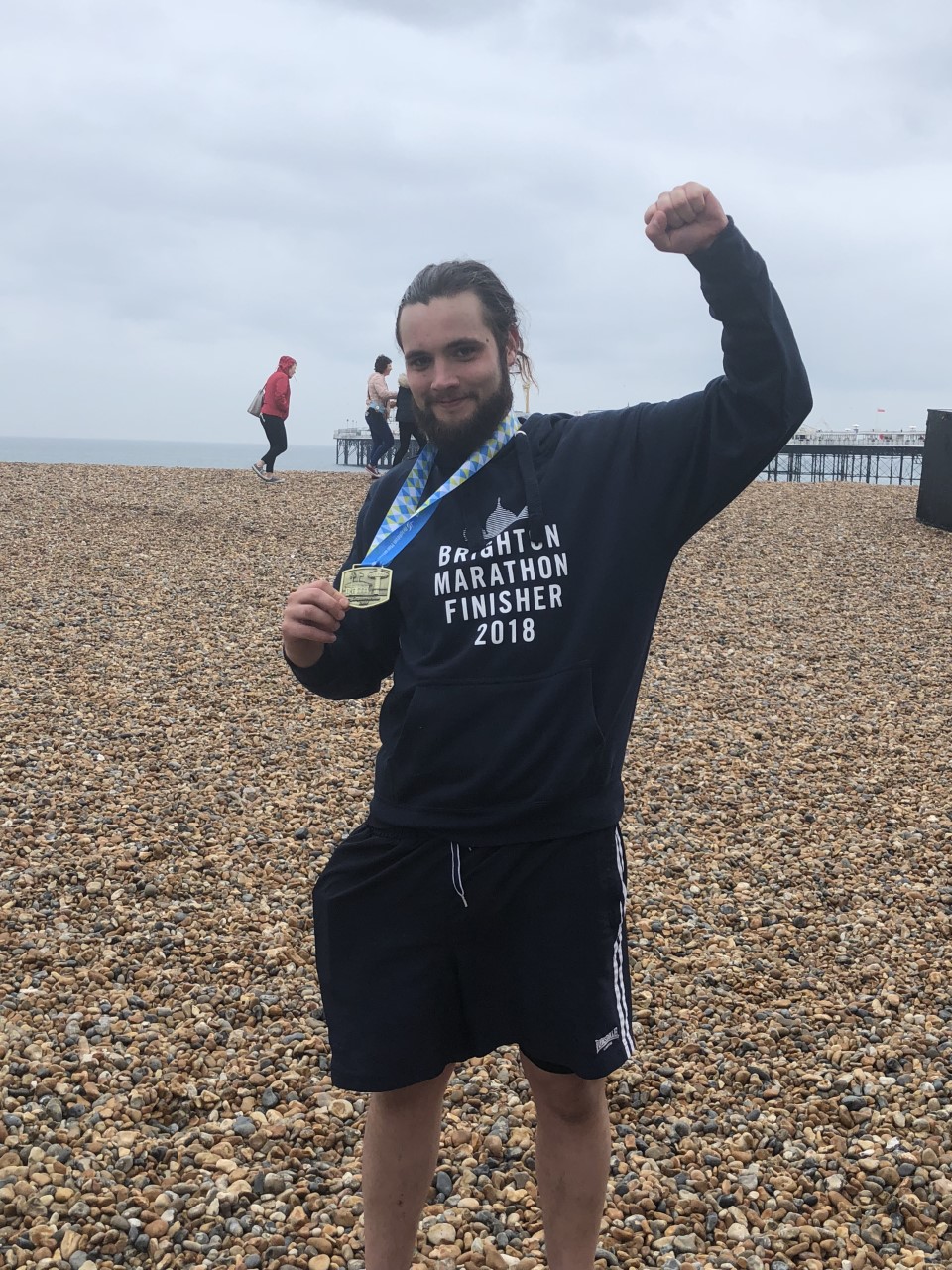 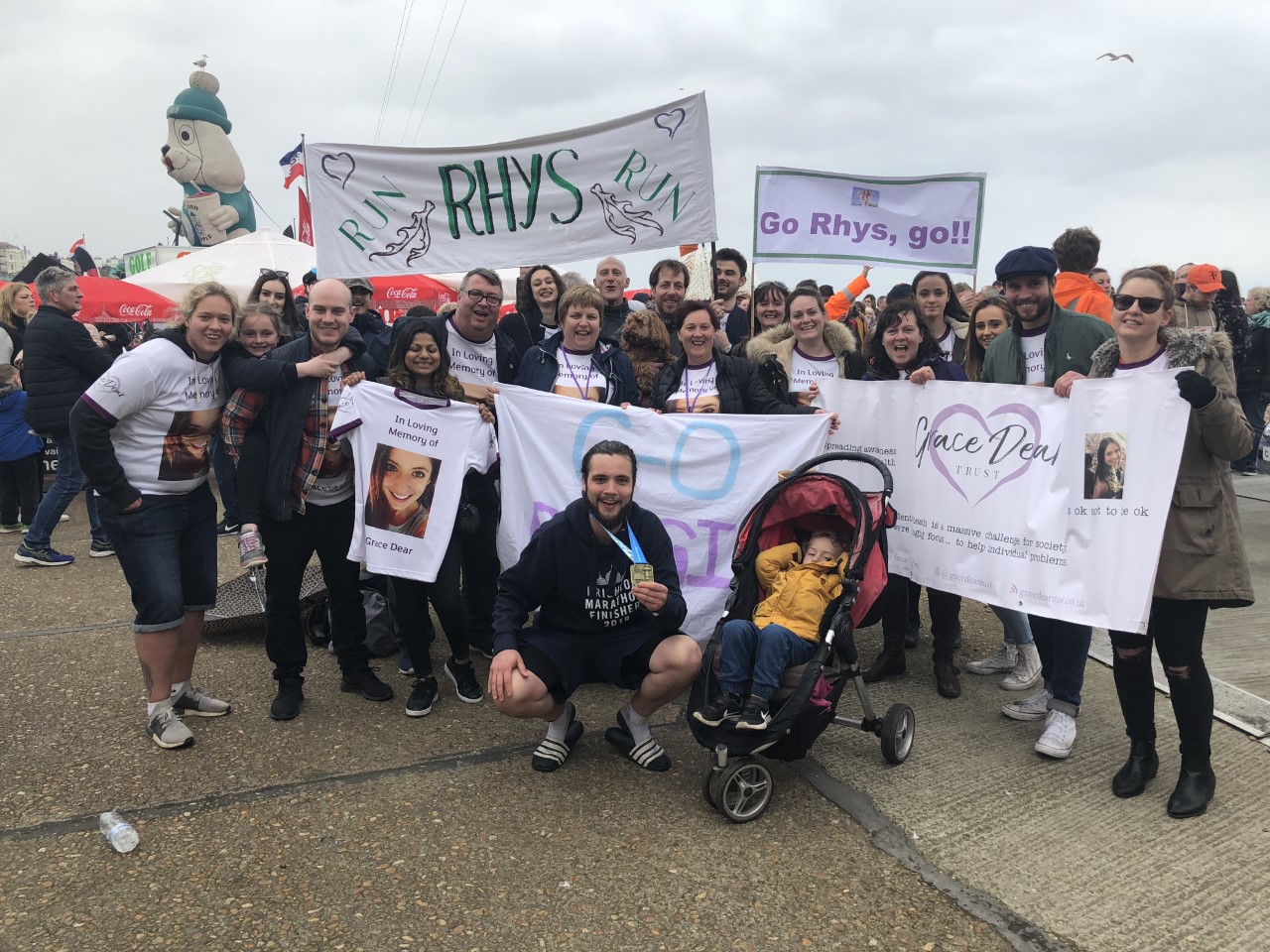 Before Grace’s depression and anxiety worsened Grace was always keeping active, waking at the crack of dawn for the gym, where she would run nonstop on the treadmill and spend all hours walking throughout the day! Of course there were times when her relationship with fitness wasn’t healthy but the majority of the time it seemed to keep her stable and gave her focus when her mind was racing.

After Grace had passed and we had decided to start a trust in her name, to help our family through our grief by feeling like we were helping others from going through the same pain as us. Having experienced as a family the feeling of helplessness when Grace was unwell we wanted to make a difference to others, giving them the message ‘It’s Okay not to be Okay’.

At our first event, Grace’s previous employers rallied a group of us to run in the Denbies half marathon, it felt fitting to be the first event in Grace’s honour. I said yes to participating – how hard could it be, right?

With only 2 months to train I went on my first ‘run’ with a friend who was an experienced runner. It was meant to be an easy 5km, but having got to the end of the road I was starting to struggle. I think I only managed 2.5 miles, having stopped to walk several times!

My uncle, knowing how hard half marathons were from experience, offered to take me running. The first few runs were exactly the same as my first one – horrible, slow and painful! As I began to train more and more I could feel my body getting into the rhythm of running and it became my release from the grief and pain I was feeling. After months of training I managed to finish my first half marathon in September with a time of 2:14:21 (please bear in mind this was mostly uphill!….)

After the race I was on a complete high, I couldn’t believe what I had achieved! The training had been tough but the focus running had given me was something that had helped me through my pain and I needed another challenge to drive me forward…The next step was to sign up to Brighton marathon and run for my sister on behalf of the Grace Dear Trust!

Having trained throughout the winter with several training partners, through horrible weather, a few injuries and self-doubt along the way, the day of the marathon crept around! Having spent many more months clocking up the miles, slamming my feet on the pavement I felt fairly calm. I had put in all the hard work, had raised several thousand pounds and knew I had a load of supporters on the sea front ready to cheer me on. Nothing was going to stop me, there was no way I was going to let anyone down ,and most importantly I was not going to let Grace down.

I had been told that long distance running was just as much a mental endurance as it was a physical endurance and when I got to mile 18 I had to really dig deep! But the pain I was feeling in my legs and my head was nothing compared to the pain my sister had felt! I once heard a podcast and a man had tried to take his own life by being hit by a car. He had completely shattered most bones in his legs which would have to be broken again and again to be able to heal correctly. He was asked why, and his response was along the lines of “the physical pain in my legs is nothing compared to the pain I suffer in my head”.

When I had crossed the line I was overwhelmed with the support I had received from my friends and family, but knowing Grace would have been proud made all the hours of training, aches, pains and blisters all worth it!

In April 2018, I took part in the London Marathon and was delighted to have raised just over £1500 for the Grace Dear Trust.

I was first offered a space in the Marathon through work just three months before, in January. As soon as I opened the email and saw ‘Congratulations you’ve been offered a place’, I knew I wanted to run it for the Trust and raise money and awareness for such an amazing charity. I also knew that I needed to start training – fast!

Grace was one of my wife’s best friends and I would often see her in the gym in Leatherhead running on the treadmill for what seemed like hours on end. After that, she would then often complete an intense weights work out and finish off with a spin class. Despite all of this she would always find the time to stop and chat and ask how we all were. This would describe Grace down to a tee: extremely motivated, a lovely person inside and out and most of all a wonderful friend to Katherine. It was an honour to run the 26 miles in memory of her and I know it’s a challenge Grace would have loved to have done and she definitely would have beaten me!

Just after 8 miles in to the run, the cramp started and it was tougher than I thought! The heat didn’t help but nothing compared to the struggles Grace felt in her battle with depression. This motivated me to carry on all the way to the finish and stumble over the finish line.

The next day I woke up full of aches and pains and saying I would never run again. That didn’t last long though – I am looking forward to running for the Grace Dear Trust again in October in the Royal Parks Half Marathon and spreading awareness that “It’s OK not to be OK”. 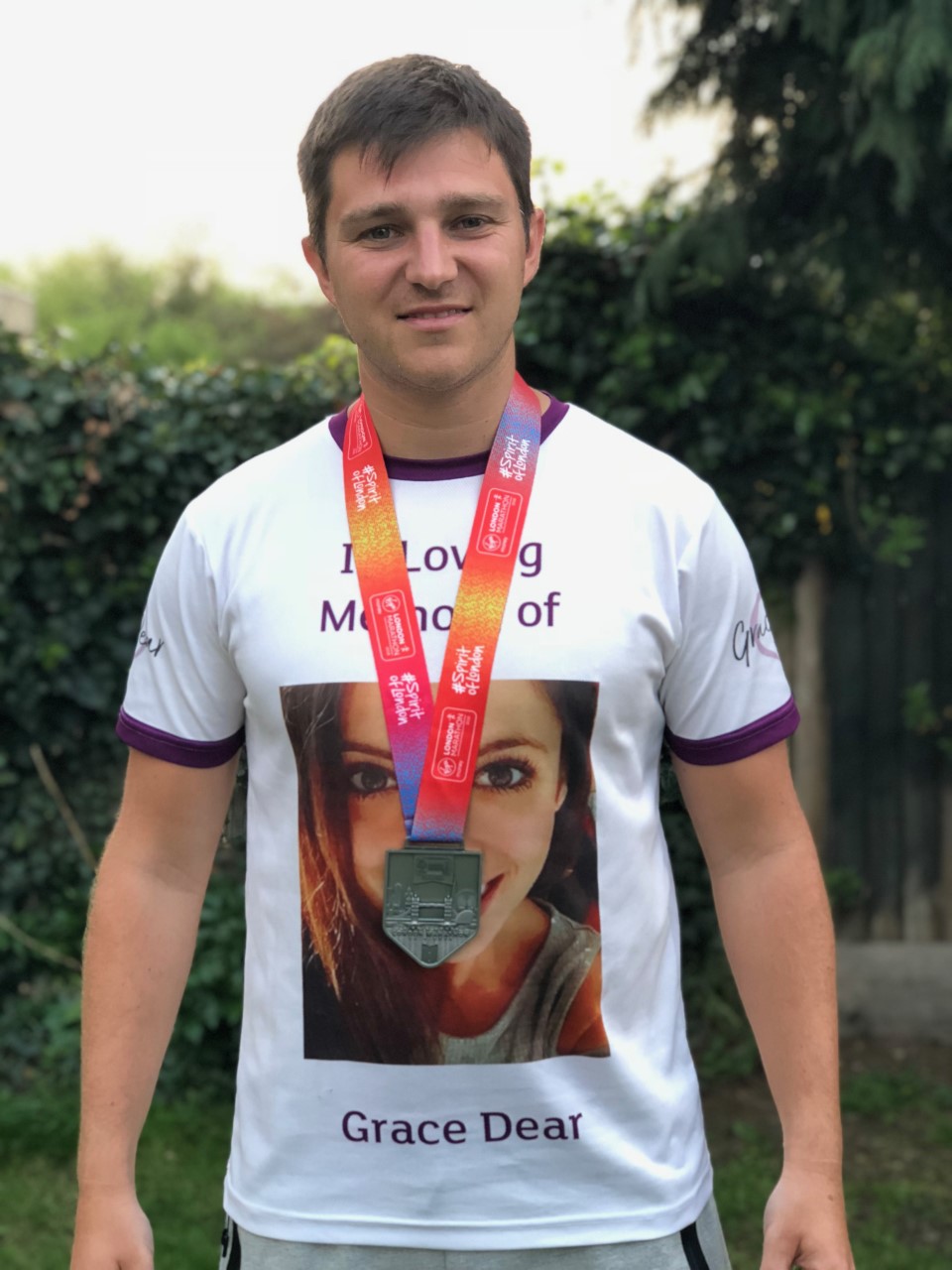 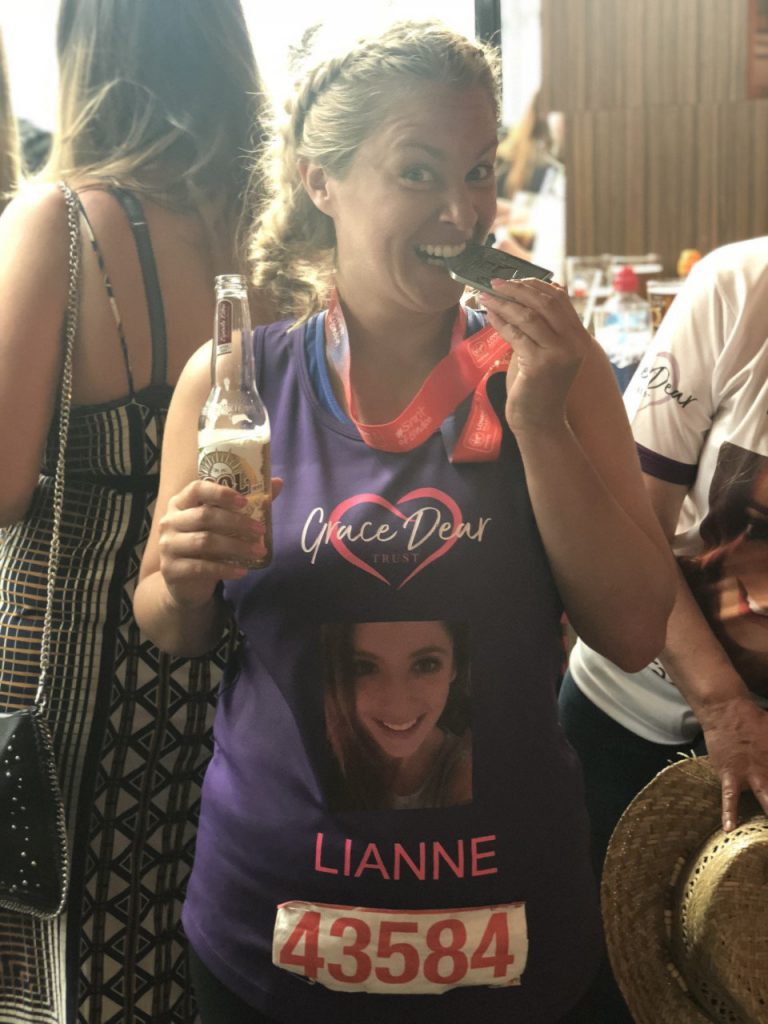 In April 2018, I completed the London Marathon in memory of my two beautiful friends Grace and Phil.

I can honestly say it was one of the best experiences I have ever taken part in. It was also the most challenging thing I have ever done, both emotionally and physically. The hardest part was the training, but the most enjoyable, albeit emotional, part was that whilst out running I thought about Grace and Phil so much, remembered why i was doing this and hoping they would be proud. When I started to feel tired and achy I used to always tell myself this is nothing to what some people face every day. I even used to imagine Grace and Phil sitting on the clouds laughing at me, telling me to hurry up, or not to stop! I used to have conversations with them some days, which makes me sound like a bit of a nutter, but I did and it really helped!

The big day soon came round, and it was one of the hottest of the year. Seeing family and friends the whole way round was just amazing, i cant thank them enough for following me round London in that heat for 5 gruelling hours! it’s so exciting when they all start cheering though, you feel like some kind of celebrity! With the support of thousands and thousands of others I eventually crossed the finish line, it was the most incredible feeling. I felt so proud to be able to do something like that for them and also the Dear family who are doing the most incredible job of raising awareness.

If anybody is still reading this, and is thinking about doing the marathon then go for it, it really is the most amazing day. Seeing so many people come together to help one another, share stories, encourage you to the next mile, and just generally care really is a beautiful thing to be part of.
If there is anyone out there struggling with mental health problems, please ask for help there is someone out there wanting to help you. Look after one another as you never know what struggles people are facing and no one needs to face them alone.

Finally, thank you so much to the Dear family, it was an honour to support your charity. You are the most incredible, fun, caring, loving family and your passion to help others blows me away!
Love you all to the moon and back